My latest works are based on seeing the earth from above-from a plane or satellite.  The experience of my first transcontinental flight was a stunning visual experience that demonstrated in a graphic way the enormity and variety of the land mass our country is situated upon; it was at that moment my painting became inexorably tied to flying. I’m fascinated by visual sensations resulting from the interplay between man-made elements and the natural land surface, and how people carve out a living in the geography in which they exist. Humans have long engineered ways of surviving in quite extreme locations as is evidenced in the green fields now seen in the desert of Saudi Arabia, the terraced farming in the mountains of Chile, and the reclaimed land of the Netherlands. The experience of flying and the views from satellites gives a clear view of the changes humans have imposed on the planet-an impact that to me is both beautiful and disturbing at the same time. And yet there are terrains that defy transformation and it is the meeting point of the man-made and the untamable that is the most fascinating to me-where cultivated land hits desert, where cities meet rivers, and where highways meet mountains. The irregular shapes of the overall paintings reflect that. The specific imagery for the large, multi-paneled paintings is the agricultural lands covering much of the middle US with center pivot irrigation circles and contour farming playing a major role.  The circles make a particularly graphic design that both imposes on and is constrained by the land while the contours reveal patterns of a rolling, undulating landscape.

To me, there is a strange intimacy from afar in these views, a sort of voyeurism made possible by the relatively new ability to see our home from that point of view-the gravity-defying sciences of flight and satellite technology have given us an unexpectedly poetic view of where we live. Driving through the seemingly endless fields of crops gives one sense of the magnitude of the human effects on the land, the view from above, quite another.

The paintings are made of separate wood panels that are either physically cut in to one foot or six inch squares, or divided pictorially in to those dimensions. I choose these sizes to correlate to the one mile squares that the mid and western US was divided in to by Thomas Jefferson shortly after the Revolutionary War. Because the paintings are individual panels, they can be configured to nearly any size or shape of space giving them great flexibility for exhibition. In recent installations, they have been hung either directly on the wall by a groove cut in to the back or by sections where the individual panels are attached to a hanging structure. This format gives me an organizational method from which to approach the paintings and directly ties the process of making the work to the division of the land. To make the textures and patterns in the circles and rectangular plots I made tools that were essentially center pivots themselves which adds an additional conceptual relationship to the land because of how the work was made--the painting looks the way it does because of the artistic tools that were used just as the land looks the way it does because of the farming and irrigation tools that were used. 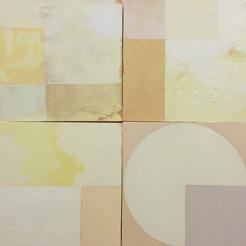 A conceptual distinction at work in one of the subfields of political economy vividly comes to mind when reflecting on Betsy Bannan's work: that between first nature and second nature. First nature is nature untouched by man; left to its own devices; freely and chaotically testifying to the exuberance of life. Second nature is nature as tamed by man, as framed and constructed: the zoo, the English garden, the designated wilderness. When we observe Bannan's work, the contrast between the two seems to be made obvious. In Fly Over and Voyeur, we see second nature – irrigation circles, soil improvement, crop growth; agriculture. Big Country, by contrast, shows nature as untamed, wild nature, first nature. Note how the rivers cross the grid built by the squares of which the work is assembled. Note how some of them are unconnected, or seem to vanish, only to spring forth somewhere else.

Yet, I submit that Betsy Bannan also invites us to question this distinction. Recall that the designated wilderness is an example for second nature, not, as countless romanticizing hikiers, mountain climbers, and backpackers would like, for first nature. It is a near-perfect simulation of first nature: but it is designated as such, planned as such, mapped out as such. To illustrate what this means, recall the contrast I just made between the grid formed by Bannan's squares and the rivers transcending, questioning, criticizing them. The grid is what makes it possible to think of the rivers as critiques of the grid. If the grid were not present, the rivers would simply flow in majestic positivism – but there would also be no notion of this flow being, in any sense of the word, “wild.” We know what is wild because we know what is domesticated. It is by the eye of the planner, the eye of the grid – the eye of the political economy – that we can establish what resists planning, domestication, and construction.

The second point I would like to discuss, then, is the eye, the gaze, the gesture contained in Betsy Bannan's work.

The first is the perspective itself. We are invited to consider ourselves Voyeurs hovering over the scene; flight and what comes with it: the bliss of take-off, the new horizons awaiting us; Prometheus who does belong in the sky, who does belong everywhere; the awe of looking down on what is so very aptly called 'fly- over country'; the all-encompassing gaze one assumes when one is in the

aluminum tube in the sky (if one doesn't complain about the Wi-Fi); freedom from gravity, even; suspended motion; the exoticism of the destination.

Yet, of course, this always implies the respective flipsides: the colossal waste of a civilization rich enough to squander its resources; the hubristic Prometheanism that claims we have to be everywhere, that all is open, that everything is penetrable; the all-seeing eye in the sky peeking down, planning, organizing, dividing, conquering; freedom from social ties, freedom from social responsibility; and the tamed exoticism of tourist machineries always already awaiting the world- weary traveler at their destination.

Seen this way, Betsy Bannan's work is part of the endless affirmation of what is, the all-seeing eye reducing everything to its motionless gaze, to the tautology: this is as it is and it is because it is.

There is also a second perspective, however: contained in the process, the labor crystallized in this work of art. Betsy Bannan has not simply accepted the perspective of the all-seeing eye, she has reproduced it; and in this reproduction, she has not merely copied, but interpreted. The gaze itself, the perspective of flight, is in turn presented to us as interpreted. The artist has replaced the gaze with the touch: the visual with the tactile; the imperial command of logistics with the loving caress of interpretation. The will to power, the will to see, the will to command, is in turn overpowered. This way, the artist invites us to consider not the map, but the terrain; not the terrain, but the ground; not the ground, but its story. What we fly over, then, I suggest in closing, is a narrative, an interpretation; reminding us that, under every map, just as under every plane, there is life and story; “Man and his lesser brethren,” as St. Francis suggested; or, with Robinson Jeffers, a constant reminder that first nature is what second nature was at its inception; of the majestic indifference of Earth that was long before us.